What Is the Difference between Mediation and Arbitration?

Mediation and arbitration are some of the most common practices for conflict resolution and settling legal disputes. Only a small percentage of legal cases make it to court. Instead, a majority of issues are settled through these processes of arbitration and meditation. Arbitrators and mediators typically have a similar goal: Help two or more parties reach an agreement on a legal matter. However, many people aren't familiar with either term or what makes them different.

If you are interested in these subjects and want to explore a degree or career in this field, read on for everything you need to know about mediation vs. arbitration.

The term mediation refers to the process of a neutral third party, known as a mediator, helping two other parties discuss and attempt to resolve a legal matter.

Mediation is a voluntary process designed to reach a mutual agreement. Those who use mediation should expect to argue their perspective, provide evidence and be willing to give up particular demands to determine an arrangement that satisfies all parties involved.

Unlike arbitrators and judges, mediators do not have the authority to make a final decision—but they possess the conflict resolution skills and legal knowledge needed to facilitate legal discussions. Some benefits of choosing meditation for legal issues include:

Arbitration refers to the process of a neutral party, known as an arbitrator, being granted the ability to make a final decision on a legal dispute.

Although they are structured similarly to court hearings, arbitrations are generally shorter, more private, and performed on a smaller scale. An arbitrator will listen to each party's argument, examine the evidence, and ultimately decide on the issue.

Some benefits of choosing arbitration for a legal issue include:

In fact, in cases where the subject is complicated, arbitrators may be required to have experience in the field (e.g., accounting, engineering, construction, patents). This is why some arbitrators perform their job in conjunction with other careers, such as practicing law or presiding as a judge.

When do I use Mediation?

Certain situations may benefit from mediation rather than arbitration. Meditation should be used if both parties believe they can reach an understanding on their terms. This is often the first step when dealing with a legal matter, and it may or may not escalate to arbitration or a court hearing.

Mediation can also be used if one or more parties cannot afford to pay for a lawyer or arbitrator. Mediation is typically the next logical step if the legal matter is small or in the early stages of a disagreement. Mediation can help salvage or repair a professional relationship that may be integral for your business moving forward.

When do I use Arbitration?

In other situations—particularly those with higher stakes or more complex disagreements—arbitration is preferred over mediation.

Arbitration is a more formal dispute resolution process than mediation. Therefore, this practice is used when a legal matter has escalated to a more serious issue. Arbitration should be used when both parties cannot agree, mainly if time is a factor. If the issue involves large amounts of money or serious accusations, arbitration may be a better option than mediation as it can be legally binding.

If interested, Dispute can help you generate the necessary forms to start the arbitration process from your phone in 5 minutes. 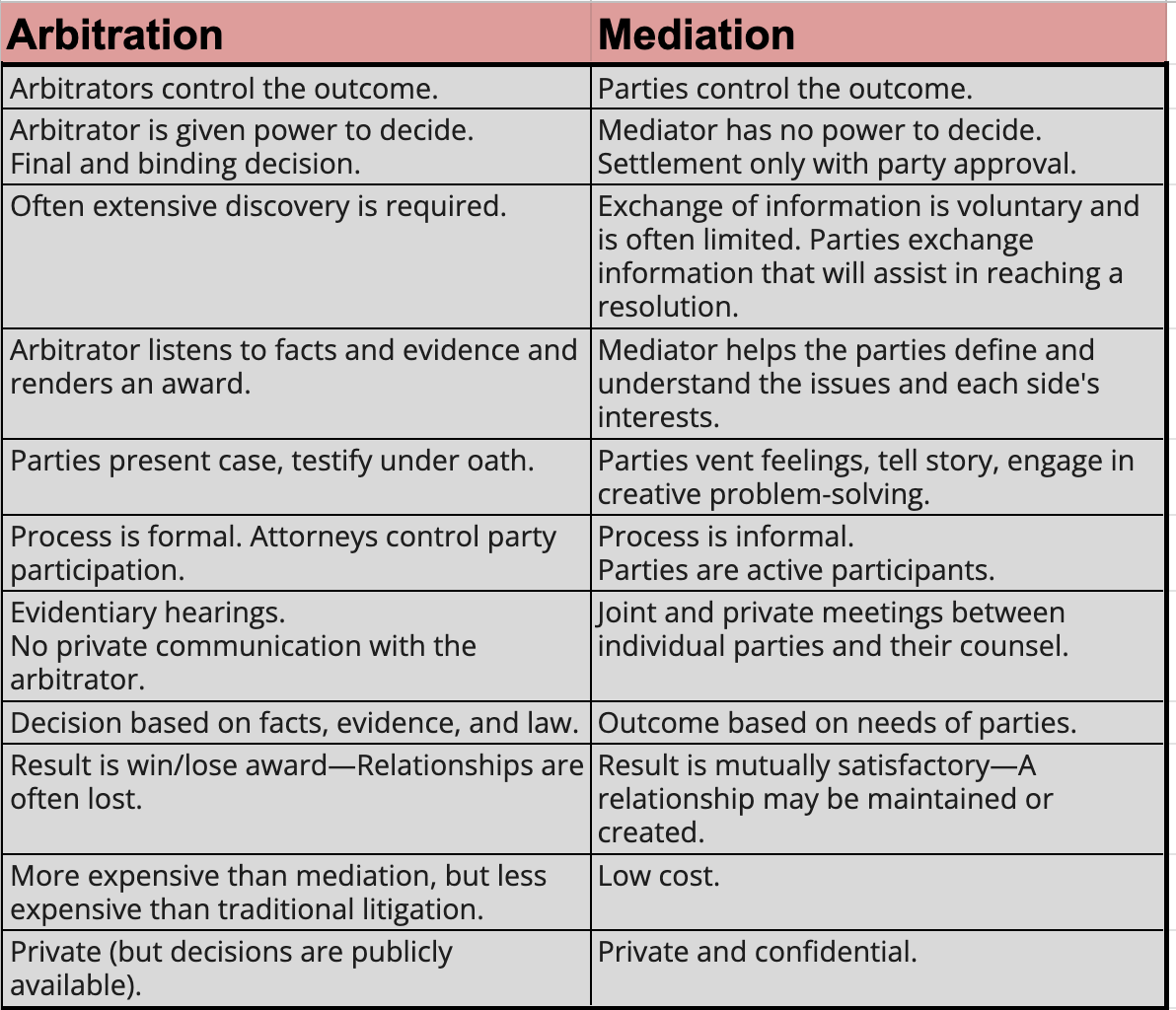 If you have any questions about arbitration or meditation, please don't hesitate to contact us.

Get Dispute to file your small claims case online today.

Win back the money you deserve.

Can I Get a Refund for my Subscription?

How Can I Cancel my Dispute Subscription?

Dispute requires a subscription to access our platform. You don't need to keep it forever.

How to Sue Equinox

Do you have a dispute with Equinox over a refund, purchase, or charges to your account?

What is JAMS Arbitration and How Does it Work? [2022 Guide]

If you have a contract stating JAMS arbitration is required, you should know what to expect.

What to do when my customers aren't paying their bills?

You aren't without options when a bill goes unpaid.